Our Birmingham Christmas weekend trip, actually a couple of weeks before Christmas, for the Christmas market seems to have become an annual event. This year we headed to Birmingham by train on the Saturday morning to visit the market and see a show in the evening, staying over, to,take a leisurely trip home on the Sunday. Of course, just our luck, we picked the coldest weekend of the year!

The Frankfurt Christmas Market has been visiting Birmingham for 51 years. Have a look at our post from last year’s 50th anniversary market.

Offering a range of different products, the market is always interesting to walk around and enjoy the “buzz”. It’s always busy. We don’t buy a lot but the German foods, Bratwurst, gluhwein and the like are always sampled. And, perhaps, a beer or two.

This year was no exception – we ate well.

Noticeable this year was the amount of development going on in Birmingham. The whole area normally occupied by the English market and ice rink is a massive construction site.

Also very evident was the discreet level of high security, after events elsewhere this has, sadly become necessary.

Taking a detour, with the thought of some special Christmas presents, we discovered The Whisky Shop in the Great Western Arcade. Now, if you enjoy a drop of Scotch, this is a place you would enjoy. Happily the Whisky Shop is a chin with a number of outlets in the UK.

Focussing mainly on good single malts, there were labels there I had never heard of. Some really interesting stories behind them as well. This one is definitely marked for a future visit.

Cocktails – The Lost and Found

It was cold, very cold. With an early dinner booked, and time to spare, a pub was a good place to be. Based on a recommendation we found the Lost and Found cocktail bar and restaurant just after lunch.

I can certainly recommend hot chips and cocktails as a good way to spend a cold afternoon. All of the pubs were crowded, but we were fortunate to find a table after the kitchen closed.

We had pre-booked an early dinner at Chung Ying Central in Colmore Row, after a great dinner there in 2016.

Normally we’d try and go somewhere new, with the idea that you can’t always repeat a one-off good experience. That would have been a good idea. The meal was not as good as before, and any complaint fell on deaf ears. 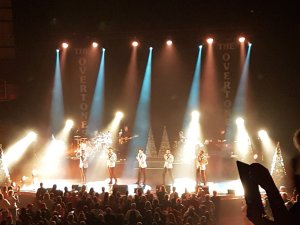 Having booked the show some months before, we headed to the Birmingham Symphony Hall to see The Overtones. They are a five piece vocal harmony group with roots in the UK and Australia.

The show was great. The focus is on the singers and not fancy props or aids, and the lighting was very well done. The range of their song selection is surprisingly wide. If you get the chance, this is a show worth going to. Something I haven’t encountered before – they invited the audience to use their phones and take photos and video.

The Overtones on Wikipedia.

We awoke to thick snow and an evil, cold wind. TV news told us that the airport and main railway station (New Street) in Birmingham had both been closed.

After a leisurely breakfast, we wrapped up and headed out. Birmingham is known for the Bullring shopping mall. We found that we could get out of the snow into the John Lewis mall, and walk all the way through the Bullring, to simply cross the road to Moor Street station.

Bearing in mind that this was Sunday, two weeks before Christmas, the shops were pretty much deserted. A bit of snow had kept people away.

Once we reached Moor Street station it was evident why people stayed away. we settled into the cramped cafe, which looks like it is still in the days of 1960s British rail. Over a cup of coffee we figure out that most of the trains for the day had been cancelled, particularly those travelling towards London. But, they said, the 1:15 MIGHT run.

We were fortunate. It did, seeing us home in a couple of hours, in a white snow covered countryside. As we passed through various stations along the way it was very clear why trains had been cancelled.

Despite snow and an iffy dinner we had a great weekend. A visit to the Christmas market, particularly if you haven’t been before, is a good day out. Stay over, go to a show, and make it a weekend break.

For that matter, plan ahead and just take a weekend break in Birmingham and you will enjoy it.