Starting with a family wedding in May, the spring and summer have been filled with activities. Now i’m trying to catch up. Here’s part 1.

From home we can be anywhere in London in under 2 hours. It’s a trip we do occasionally just for fun, or sometimes on business. We recently had a visitor stay with us on a first visit to the UK. That was a good excuse to head south and be London tourists. Here’s part one of our visit, where we started with a plan, lost the plan and just enjoyed ourselves. No deliberate visits to iconic landmarks. Just doing a day trip to London.

Trains and Underground – Getting to London 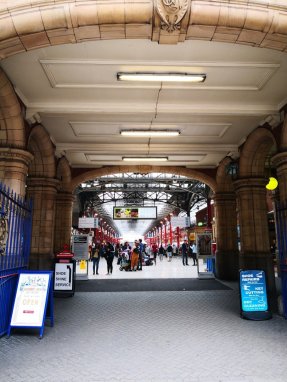 So for us it’s a quick drive to the station and a little short of an hour on a Chiltern Railways train, and we are at Marylebone Station.

Like many in the UK, we take this train ride for granted. It’s easy to forget that many countries simply don’t have this luxury. So the trip to London becomes a bit more of an adventure.

Love it or hate it, if you don’t do it often, the London Underground becomes another part of the adventure. Of course, depending on where you are going, the iconic London bus offers a slower but more scenic way to travel. In a hurry? Catch an Uber or a black cab.

Sometimes it can be enjoyable to simply walk. Some of London’s Underground stations and bus stops are quite close together, and a sightseeing walk can be fun. Finding your way around London can be tricky, but I strongly recommend the Citymapper app on a smartphone. Citymapper does give problems at times as a walking guide. Google Maps is a better tool for walking in London.

We did have a plan. Somehow we lost the plan and we ended up at Marble Arch. Who knows why, but it was a good start.

From there it’s a short walk to Hyde Park, empty on this Friday, but a good spot to enjoy a cup of coffee, sitting on the grass on a warm spring day.

Spend time in London and you will see, wherever you go, some part of the history of the city. Hyde Park is no exception. Created by Henry VIII in the 16th century as a hunting park. It was opened to the public in the following century, and remains a public park today. It has frequently been the site of protests and public events. 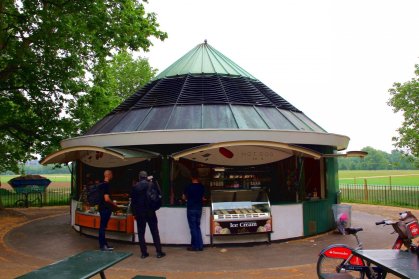 In modern London, in summer, Hyde Park is known for free, weekday rock concerts. These are generally paid events at the weekends which have to be booked well in advance, such as the Eric Clapton and Friends event which we attended in July.

Many first-time visitors (including me in my first visit) are often very surprised at the green space, like Hyde Park, in London. Visitors from some countries do perceive London as a polluted concrete jungle. Indeed, I know those have never visited the UK, who believe that is a good descrption of the whole country!

On Park Lane at Hyde Park we discovered a monument which I did not know about. The Animals in War Memorial commemorates the animals which have served the armed forces over the centuries.

The modern military is highly mechanised, powered by the internal combustion engine. It’s easy to forget the many animals, including donkeys and horses and others, which took armies to war.

A short tube ride took us from Hyde Park to Parliament Square.

Although a relatively recent site, having been created in the 19th century, Parliament Square sits in the middle of a number of buildings of historic and current importance. There are a few (see the link above) but the most noticeable for the visitor are The Palace of Westminster, or the Houses of Parliament, and Westminster Abbey. It is a “must” for the foreign visitor.

The queue to get into Westminster Abbey was long, probably partly because we visited on the Friday of a bank holiday weekend, so we didn’t try to get in. It’s a good idea to book ahead and get there early if you want to visit the Abbey.

Many of the photos in my London at Night Gallery were taken a few years ago at Parliament square and nearby, around Westminster Bridge. In a way it brings some iconic London features together – many red double decker buses passing by, the Houses of Parliament and Westminster Abbey.

One downside on this trip was the fact that Big Ben is undergoing repairs and is shrouded in scaffolding and plastic sheeting, as it will be for a few years.

A walk across Westminster Bridge and along the River Thames took us to the Southbank centre with its many pubs and restaurants. Our aim was the Southbank Centre Food Market, which we know from previous visits.

The Southbank Centre Food Market features food from all over the world. Take your pick of many different food. Sample a bit of each and have a great meal. We bought a selection of British pies, curries and eastern food, all washed down with fruit juice and craft beer.

On a number of occasions a group of us has bought our selection of food and taken it to nearby Jubilee gardens, under the London Eye, to share and enjoy the meal.

This little visit, up to this point took us to early afternoon. We covered a lot of ground, but London still has much to show off. Our plan collapsed, but we have been there often enough to still take our visitor to some interesting spots.

Watch this space – plenty more of our London jaunt to come.

Just Pin This and leave a comment – love to hear from you.